The American Ophthalmological Society (AOS) held it’s 150th annual meeting in the same locale as its very first meeting – the southern end of the borough of Manhattan in the City of New York.

This venerable and prestigious organization is the oldest medical society in America. Membership is limited to the most elite eye specialists who have not only attained world renown stature, but have also authored a thesis on original research of great import.

For its 150th anniversary, there were special symposia updating the progress that has been made during the past 150 years.

Alfredo Sadun, MD, PhD gave his usual philosophic and erudite review of the advances in Neuro-Ophthalmology, among the most venerable of all subspecialties in Ophthalmology. Ivan Schwab, MD was very creative in that he dressed in the attire of 1864, the year the AOS was founded, to deliver his lecture on advances in external and corneal diseases and therapies over the past 150 years. I moderated the session in which he presented and posed the question whether he had a prediction of how we would dress to celebrate the 300th anniversary of the AOS. He paused to think, then predicted that in 2164, the attire of 1864 would be back in vogue.

These photographs were taken of the assembled members at the 150th meeting of the AOS with the statue of liberty as the backdrop. These images will surely be hallowed for years to come, perhaps even lauded at the 300th anniversary of the AOS. 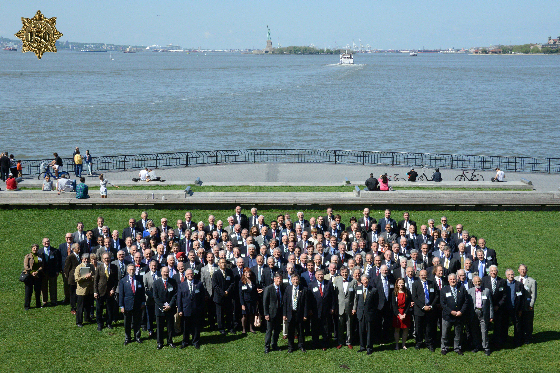