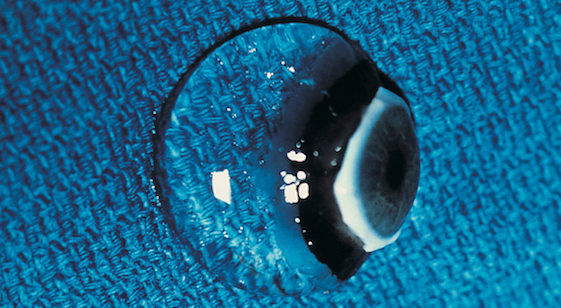 to the retina, which lines the inside of the back of the eye and acts like a film in a camera. In youth, it is a solid gel (see figure), but throughout life the gel liquefies. At a certain point, usually around the ages of 55 to 70, the vitreous body collapses moving forward inside the eye. The back surface usually separates away from the retina cleanly, called posterior vitreous detachment, or PVD. The symptoms of PVD are floaters, seen in bright light situations as a hair-like, fly-like, gray linear structures that move with eye movement.

If there are also flashing lights, it could mean that as the back surface of the vitreous body moved away from the retina it broke the retina resulting in retinal holes or tears. This can be treated in the office to prevent retinal detachment. Dr. Sebag demonstrated for the audience the ways a detached retina can be successfully repaired, citing his 2011 publication in the British Journal of Ophthalmology that describes the use of an office procedure without the need for O.R. Surgery.

If a layer of the outer vitreous body remains attached to the macula, it can contract, causing macular pucker. The symptoms of macular pucker are distortions and blurred vision. Dr. Sebag showed a video of his surgery to peel the pathologic membrane off the macula and cure macular pucker. He then presented results of a study in 50 eyes that was presented at the 2014 annual meeting of the American Academy of Ophthalmology by Justin Nguyen and Kenneth Yee of the VMR Institute for Vitreous Macula Retina in Huntington Beach, Orange County. This study demonstrated that within one month of Dr. Sebag’s surgery there is improvement in distortions, visual acuity, contrast sensitivity, and reduction in the thickness of the macula back towards normal. There was continued improvement at 3 months and 6 months. Generally, patients are very happy.

Dr. Sebag also showed a video of his surgery to cure a macular hole. This operation didn’t exist until about 25 years ago. Today, macular holes can be routinely cured with a 25-minute operation performed under local anesthesia in an ambulatory surgery center, so no hospitalization is required.

Dr. Sebag closed with a presentation of the diagnosis and management of floaters. He described the origin of floaters and the methods that were developed at the VMR Institute to measure the severity of floaters in terms of structure as well as function. Dr. Sebag showed a video of the limited vitrectomy operation he employs to cure floaters. There have now been hundreds of patients cured of their floaters with a 10-minute operation performed under local anesthesia.