Posted at 11:26h in News, Uncategorized by Bree Yee
0 Likes

Huntington Beach, Calif., January 17, 2014  — VMR Institute, a state-of-the-art facility for treatment of disorders of vitreous, macula, and retina in the Los Angeles and Orange County areas, announced today that Dr. Sebag and Dr. Chong have been named 2014 Super Doctors of Southern California.   The “Super Doctors” designation is awarded to those physicians who have attained exceptional peer regard as well as professional achievement.

“I am very pleased to be selected a Super Doctor for 2014. This award is a particularly important one for me because, it is obtained through peer/colleague nomination. I cannot express how humbled and privileged I am that my equally talented colleagues regard my work so highly. To be a doctor’s doctor is truly an honor,” said Dr. Sebag.

Each year, Key Professional Media conducts a rigorous process to identify outstanding physicians of multiple medical specialties. The process includes establishing a pool of Super Doctors candidates from the nominations of 31,000 doctors who were asked the question: “If you needed medical care in one of the following specialties, which doctor would you choose?” A research team employed by Key Professional Media then supplements each nomination by searching databases and online sources for a doctor’s credentials, honors, and professional achievements. Ultimately, only the highest regarded and most accomplished physicians are selected as Super Doctors.

The VMR Institute in Huntington Beach has been a leading facility for treatment of disorders of vitreous, macula, and retina for decades. In addition to providing outstanding care for patients in the Huntington Beach, Los Angeles, and Orange County areas, Dr. Sebag, and Dr. Chong also lend their expertise and knowledge to medical professionals throughout the country and the world, as they are considered pre-eminent authorities on the diagnosis and treatment of complex conditions of the eye.

The VMR Institute is a state-of-the-art treatment and research facility in Huntington Beach, California, near Los Angeles. The institute provides laser therapy and surgery of the eye’s vitreous, macula, and retina. Sensitive to the needs of each patient, expert surgeons Dr. Sebag and Dr. Chong offer specialty care with compassion. 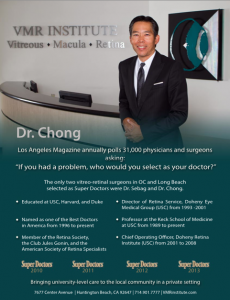