Dr. Sebag along with research students, Justin Nguyen and Kenneth Yee, presented their research with Doheny Eye Institute of Los Angeles at the annual meeting of the American Academy of Ophthalmology held in Chicago, Illinois this year.

Their research, presented as posters in the scientific posters section of the meeting, was based on the principle that all diseases can be better diagnosed and treated if abnormalities can be quantitatively measured. 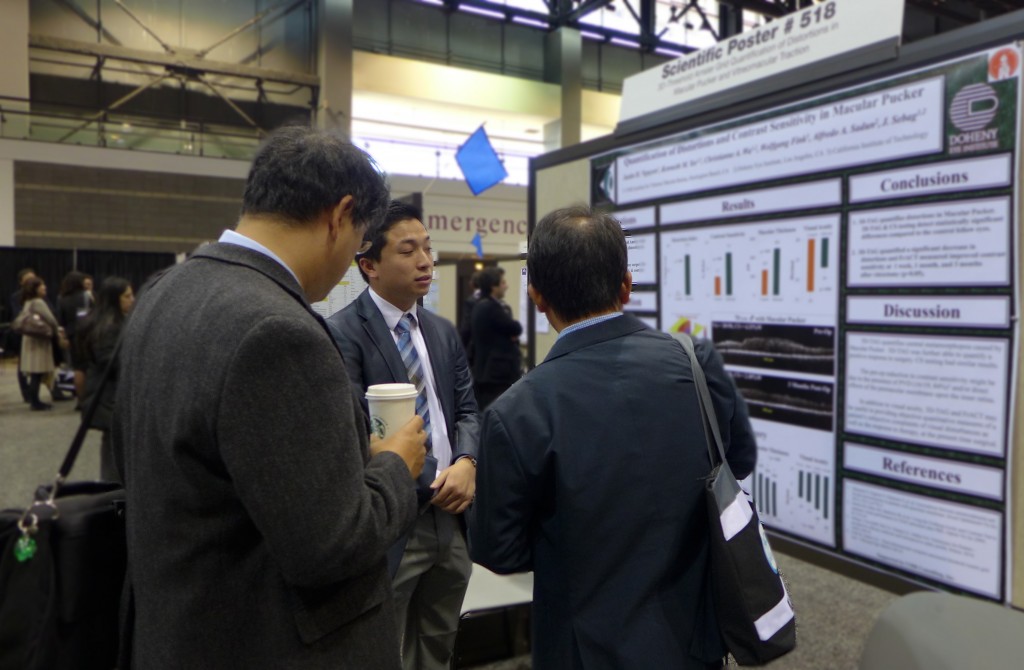 Macular pucker is a disorder of the macula, central part of the retina, characterized by distortions of the macula that cause distortions in vision. To date, the only measures of this abnormality are visual acuity (size of letters) and thickness of the macula (OCT imaging). We used a prototype instrument developed by Alfredo Sadun, Chairman of the Doheny Eye Institute in LA, and his collaborator at CalTech to measure the amount of distortions. We also measured contrast sensitivity using an approach developed at the University of Freiburg in Germany. Both tests were able to not only quantify deficits induced by macular pucker but also a statistically significant improvement following surgery in both indices. This will be useful to gauge the severity of disease and choose the right cases for surgery, but also gauge the efficacy of surgery as a quantitative outcome measure of the quality of care. Lastly, new future therapies can be developed using this novel quantitative approach to diagnostics.

The Freiburg Acuity Contrast Test (FrACT) was used to measure the impact of floaters on vision in 44 patients. There was an average reduction of 75%. Following limited vitrectomy, every single case had normalization of contrast sensitivity within one week of surgery. This remained normal at 1 month, 3 months, 6 months, 9 months, 12 months, and 18 months after surgery. The use of contrasts sensitivity measures enables an objective reproducible way to quantify the impact of floaters on vision facilitating case selection for surgery. Furthermore, the efficacy of surgery is quantifiable using this approach, providing  a quantitative outcome measure of the quality of care. This can also be used to evaluate new ways to treat floaters such as pharmacologic vitreolysis [Sebag J:  Pharmacologic vitreolysis – premise and promise of the first decade. (Guest Editorial) Retina 29:871-4, 2009]