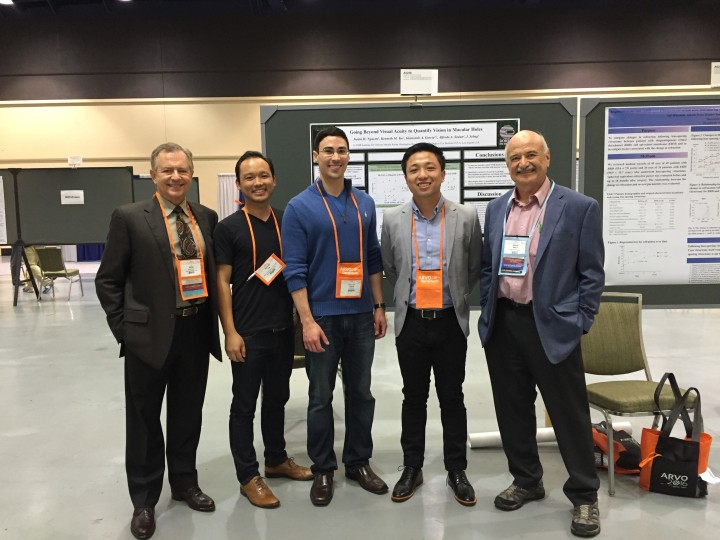 Recognized as one of the top 50 medical meetings by the Healthcare Convention & Exhibitors Association, ARVO is the world’s leading educational and networking forum for academicians, clinicians, researchers, students and trainees in the fields of vision research and eye science.

The Association for Research in Vision and Ophthalmology (ARVO) is the premier eye research organization in the world. It’s annual meeting draws over 12,000 scientists and clinicians from all over the world to learn of the latest advances.
Last year, VMR Institute had the privelege of being included amongst the less than 5% chosen to give a podium presentations.
For ARVO 2016, the VMR Institute for Vitreous Macula Retina was selected to present its research as posters on their research titled:
Defining Clinically Significant Vitreous Floaters with Objective Quantitative Measures of Vitreous Structure & Visual Function and Going Beyond Visual Acuity to Quantify Vision in Macular Holes 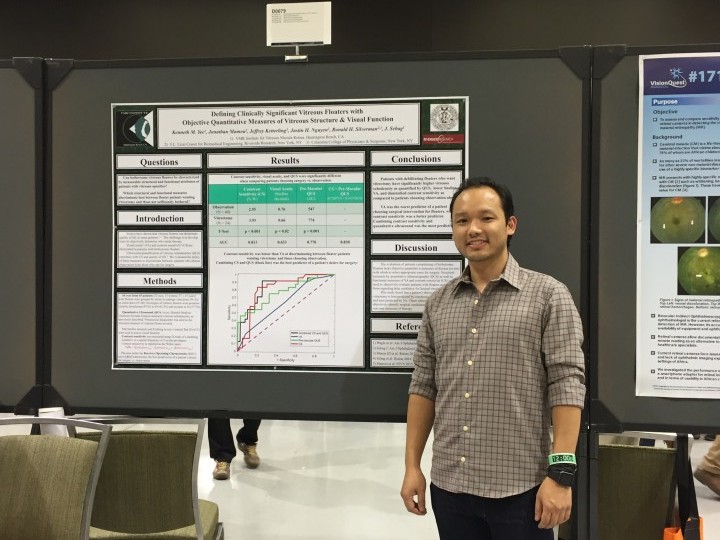 VMR Institute Researcher, Kenneth Yee presented on studies that have shown that vitreous floaters can deteriorate quality of life in some patients. The challenge is to develop ways to objectively determine who needs therapy. Visual acuity (VA) and contrast sensitivity (CS) are diminished in patients with bothersome floaters. Ultrasound quantification of vitreous echodensities (QUS) correlates with CS and quality of life. We evaluated the ability of these measures to discriminate between patients who choose observation from those who opt for surgery.

The evaluation of patients complaining of bothersome floaters lacks objective quantitative measures of disease severity with which to select appropriate cases for surgery. Structural measures by quantitative ultrasonography (QUS) as well as functional measures of VA and contrast sensitivity (CS) can be used to objectively evaluate patients with floaters and counsel them regarding their candidacy for limited vitrectomy.

This study found that a patient’s desire to undergo vitrectomy is best predicted by combining QUS and CS, and least predicted by VA. These indices may thus be useful to objectively identify surgical candidates, but may also be useful outcome measures of therapy. 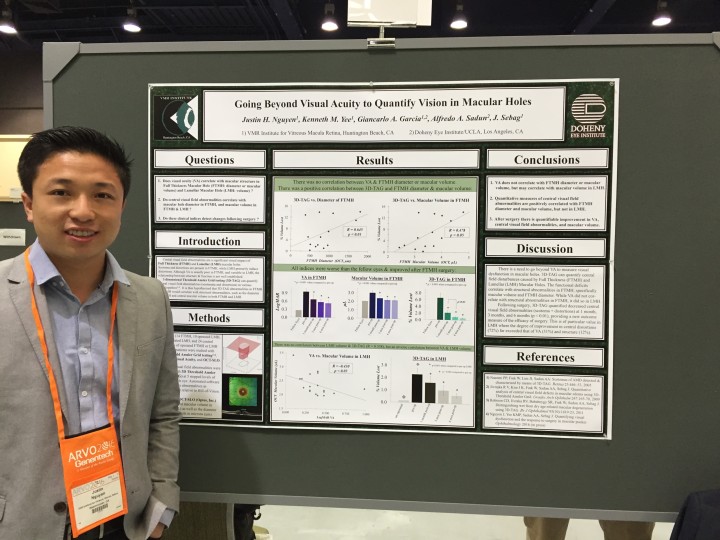 VMR Institute Researcher Justin Nguyen presented research on the theory that Central visual field abnormalities are a significant visual impact of Full Thickness (FTMH) and Lamellar (LMH) macular holes. Scotoma and distortions are present in FTMH, while LMH primarily induce distortions. Although visual acuity is usually poor in FTMH, and variable in LMH, the relationship between structure & function is not well established.

3-Dimensional Threshold Amsler Grid testing (3D-TAG) can quantify central visual field abnormalities (scotomata and distortions) in various maculopathies. It is thus hypothesized that 3D-TAG abnormalities in FTMH and LMH would correlate with structural abnormalities, such as the diameter of FTMH and central macular volume in both FTMH and LMH.

There is a need to go beyond VA to measure visual dysfunction in macular holes. 3D-TAG can quantify central field disturbances caused by Full Thickness (FTMH) and Lamellar (LMH) Macular Holes. The functional deficits correlate with structural abnormalities in FTMH, specifically macular volume and FTMH diameter. While VA did not correlate with structural abnormalities in FTMH, it did so in LMH.

Following surgery, 3D-TAG quantified decreased central visual field abnormalities (scotoma + distortions) at 1 month, 3 months, and 6 months (p < 0.01), providing a new outcome measure of the efficacy of surgery. This is of particular value in LMH where the degree of improvement in central distortions (72%) far exceeded that of VA (31%) and structure (12%).

This study aims to use a novel light scattering device to objectively quantify the optical effects of vitreous floaters. We hypothesize that higher light scattering measurements will correlate with worse CS in patients with floaters.

The non-linear relationships observed between CS and polymerization, as well as CS and scatter size are postulated to be due to contributions from other vitreous molecules not studied in these experiments. Photolithography studies, however, support the non-linear correlations observed herein. This approach provides a structural correlate to the functional deficit (CS reduction) resulting from floaters. Both quantitative indices could thus serve as objective measures of floater severity, useful for decision-making regarding management, and as outcome measures of various therapies.

Effects of Age and Vitreous Structure on Contrast Sensitivity

Contrast sensitivity (CS) is believed to decline with age, but the mechanism(s) are unknown. Diminished CS has been associated with increased vitreous echodensity on quantitative ultrasonography (QUS) and decreased macular ganglion cell complex (GCC) thickness. This study evaluated the relationship between vitreous echodensity, posterior vitreous detachment (PVD), GCC thickness, and CS as related to age.

This study demonstrates that PVD is associated with worse CS, independent of age. Further, CS declines linearly with age in individuals with PVD but not in those without PVD. Individuals with PVD also experience progressive increase in vitreous echodensity with age, likely accounting for diminishing CS. However, eyes without PVD do not experience this. Thus, there are structural and visual effects associated with PVD that worsen with increasing age, even in the absence of age-related GCC thinning.